In Department Allocation you are able to allocate funds between departments by completing a transfer.

For church organizations in particular, the department allocation is often used on a monthly basis where a template is setup for each fiscal year and the church determines a few possible options for transferring. It is commonly referred to as the budget but is not a true budget where individual income and expense accounts are being budgeted; although, that may be the basis for the department allocation. One method is to determine a specific dollar amount to transfer each month from Unallocated Church Budget (000200) to other departments regardless of how much is given each month and this can leave the department Unallocated Church Budget with either a surplus or deficit depending on its prior balance and how much came in for a given month. In this method the Allocation Amount populated would be determined at the beginning of the year and not edited month by month as it would only be updated next year when a new amount is voted. Another method is to always distribute the entire amount that came in for Unallocated Church Budget for a given period; for example, a church may setup percentages and each month the different departments receive however much their percent allocation is of the amount that came in for that month. This method will typically result in Unallocated Church Budget maintaining a zero balance as it is distributed in full each month to the other departments and to do so the Allocation Amount would be updated each month to the amount received for Unallocated Church Budget so that the Sending Department ends at zero each month. An additional method that may be setup would be to distribute the specific dollar amount voted but only if at least that much came in for that month. In this scenario, as long as the amount voted was received that month the Allocation Amount would remain the same; however, if the amount received for the month was less than that voted amount, only the amount received would be distributed and the Allocation Amount would need to be edited. In this method, the sending department may carry a surplus balance if the voted amount is regularly surpassed.

You can print or download a list of department allocation templates using the printer or excel icons on the right above the grid view.

There are action buttons on the right for each department allocation to complete the transfer without opening the template, edit, and delete the template.

Add Department Allocation Template will allow you to create a new template in the template view screen which is the same screen you would see if you were to edit an existing department allocation template. You will begin by selecting a sending department and then you can send to one or more departments using defined amounts or percentages. There is a field in the top right of the screen that will summarize the sending departments current balance so you can see how much is available to send. The system will allow you to send funds from a department that has no balance or a negative balance if necessary but will prompt first to confirm your desire to do so which will put the sending department further in the negative. When populating amounts and percentages, the percent total must equal 100.00% for the template to complete and allow transfers. If you have a department receiving an amount, instead of or in addition to a percentage, then the amounts defined will receive the allocation first and the remaining amount from the Allocation Amount defined at the top would be split between the percentages defined for each department. 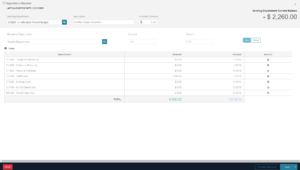